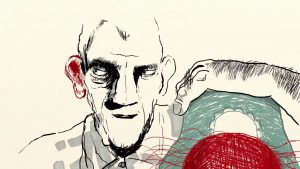 S., 8 years old, is a little Turkish girl with an overflowing imagination. She is keen on nature and animals. As she is in hospital, she is looking back on happy holidays in her grandparents’ village, but dark and terrifying memories emerge and, little by little, begin to make sense.

Ayce Kartal was born in Turkey and studied animation at the Anadolu University in Eskisehir. He is the director of the shorts BACKWARD RUN and BIRDY WOUAF WOUAF. WICKED GIRL is his latest film and it premiered at Toronto IFF.

In 2000, Ayce Kartal graduated in Fine Arts Animation Department of Anadolu University in Eskişehir, his home town in Turkey. Between 2000 and 2004, he worked as a research assistant in this same department. He finalized his Master of Fine Arts in 2010. After completing the « Time Based Arts Pre-PhD » program of the New South Wales University in Australia, he got a scholarship to join the filmmaking section of the New York Film Academy. He graduated in 2009. All of his short films are multi awarded in festivals.
In 2013, he directed Backward Run, a short film about Parc Gezi’s events of 2013 in Istanbul, produced by LES VALSEURS. This film, made in the rush of the events, had a real impact in Turkey. It has been selected in more than 100 festivals and won over  fifty awards in Turkey, in France and all around the world.
In 2016, he signed Birdy Wouaf Wouaf, a metaphore about freedom of speech as part of the collection Dessine Toujours! of Canal +, created in tribute to the Charlie Hebdo events.
In 2017, Ayce Kartal directed Wicked Girl for Arte. Since its World premiere in Annecy (where it won the Jury Prize), the film has been selected in more than 40 world re-known festivals such as TIFF,  Uppsala, Gijon, Ottawa (Best Narrative Short Award), Leeds (World animation award) etc. and was awarded in more than 15 of these festivals. The film, made of more than 10000 hand-drawn images, tackles the sensitive subject of child rape in Turkey, the home country of the director, narrated from a child victim’s perspective. Despite the darkness of its topic and thanks to Ayce’s poetic animation style, the film never falls into desperation.