Film Editor, Italy. Giogiò Franchini was born in Napoli (July, 11, 1959).  He worked with Paolo Sorrentino, Jonathan Demme, Valeria Golino, Antonio Capuano, Andrea Molaioli, Alessandro Baricco, Ascanio Celestini, Fausto Paravidino,  Antonietta De Lillo, Daniele Ciprì, Pappi Corsicato, Sergio Rubini, Roberta Torre, Domenico Procacci  and many others.  In 1995 he brought film post-production to Naples: “Racconti di Vittoria” was the first film edited in Campania with a digital system (AVID Film Composer). In 1996 he introduced the AVID system to the Nuovo Cinefonico di Cinecittá: “Pianese Nunzio fourteen years old in May” was the first film edited in Cinecittá’s historic studios without the use of a traditional moviola. During this period he also dedicated himself to teaching editing through lessons, internships, and seminars; his instruction was a benefit to, among others, la Fondazione Toscanini,  the Sapienza University in Rome, the Suor Orsola Benincasa and the Federico II University in Naples, the University of Parma, the Multimediale Scrittura e Immagine Institute of Pescara, the Documentary School Città della Scienza—Istituto Luce, the Academy of Architecture in Mendrisio, the Holden School in Turin, the Gian Maria Volontè School and the Centro Sperimentale di Cinematografia in Rome.

Director and Programmer of Le Cri du Court and of the Best Of International Short Films Festival, La Ciotat. Brice has been in deep with films for as long as he can remember.  At one point, after barely graduating from High School ("Sorry I didn't hand over my essay today, I saw a movie that sucked my interest last night" he told his teacher once) and while in the middle of failing his studies in History in college for about the same reason (plus some heavy partying of course), he got to be involved with the wrong crowd : the movie making type. After being a night watchman looking after production cars and empty festival tents, making coffee and sandwiches, trying to find something meaningful and cool to do with his life, he got entangled in the short film festival business for the better part of his life (20 years). Short of being a career oriented guy, ceaseless love and dedication to films and film makers is, up to this day, one of his most defining features.

Author, Journalist on issues related to Cultural Heritage (archaeologist) and musician, Belgium. Gaspard Giersé is an archaeologist and artist who dedicates himself to Brussels. With his project «Les Visites de mon Voisin» (The Visits of my Neighbor) , he exposes the identity of this city in the form of visuals, videos, routes and performances. Director of micro-documentaries he gives voices to almost centenary Brussels inhabitants in his series «Fix de mémoire» (The memory Fix).

Documentary distributor and producer (Bo Film), Italy. Grown in Brussels, Serena Gramizzi graduates at Bologna University, with an experimental thesis on the director Alberto Grifi. Soon after she starts her career as organizer. In 2013 she founds the production company Bo Film, with a precise social and creative editorial line and an international work methodology (most of the films she produced are international co-productions). With Bo Film she produced films that premiered in important festivals (Visions du Réel, Thessaloniki Doc Festival, CPH:DOX, Festival dei Popoli, One World, Torino Film Festival…), were internationally theatrically released and broadcasted (France Télévisions, VRT, Press TV, RAI and SKY ARTE). Some of the film she produced are: “Un paese di Calabria” by Shu Aiello and Catherine Catella; “Almost Nothing | Cern Experimental City” by Anna de Manincor | Zimmerfrei; “Vittorio de Seta Maestro del Cinema” by Simone Massi, and “The Black Sheep” by Antonio Martino.

Documentary film director, Moldavia. Olga Lucovnicova (Moldova, 1991) is a documentary filmmaker, a member of the European Film Academy and a film researcher. She studied six years of cinematography in Moldova and two years of documentary filmmaking in Portugal, Hungary and Belgium. Her last film MY UNCLE TUDOR was screened in over 50 film festivals and won many important awards like the Golden Bear at Berlinale 71st Edition, European Film Academy Award 34th Edition and many others. Currently, Olga works on her research project on prosthetic memory in the post-Soviet society, funded by The Research Foundation – Flanders at the doctoral school of the KU Leuven University (Belgium).

I am 17 years old, I live in Lyon, France, and my mother is Russian. I have always dreamed of becoming a filmmaker. Next year, I am going to study at Concordia University in Montreal to realise my dream. I have already made some short films with friends to dive into the world of cinema. (screenplay, acting, sets, editing..) That is why I am extremely happy to participate in your festival!

I am 22 years old, I live in Brussels and I am finishing the HELB film school in the editing section. Film and music are my two great passions, I feel at home with them. I love escaping and escaping reality with these art forms. I search the Internet or books for the secrets of filming, the different points of view of directors or even the world of animation. I would like to start studying 3D from September to learn more about this vast world that fascinates me.

I am 17 years old and live in Quarto in the province of Naples. I am a student at the Institute Alfonso Casanova in Naples, I will soon begin the fifth year of my studies in Cultural Services and of the performing arts. I am a very sunny, shy and enterprising girl, I like to have new experiences and above all broaden my horizons.

I have always been fascinated by cinema and it has served me as catharsis, it has allowed me to put words and images to my emotions, to find answers to certain feelings that bubble up within me, in many ways it saves my life. Thanks to cinema, my psyche has been built, my vision of humanity, taking inspiration from the great authors who have marked its history.

I was born on 2 March 2000 in Quéretaro, Mexico. I study architecture at the ULB in Brussels. I love Art and Cinema very much. The theme of escape inspires me and I am eager and curious to discover the visions of filmmakers on this theme of freedom that inhabits each of us.

Hello, my name is Gabriele, I am born in 2004 and I am from Naples. I attend Peppe Mastrocinque's film university and my dream is to act.

I am 19 years old and it is difficult to introduce yourself in a few words when you love so much. So I will simply say these words: live, theatre, claim, passionate, write, meet...

To describe myself I would say that I am a 24-year-old man (still a bit of a boy), sensitive, a bit shy and critical, but who likes to explore topics and live with many feelings.

I am twenty-three years old and originally from Nocera Superiore in the province of Salerno. For the past five years I have lived in Bologna, a city that nourishes and welcomes me on a daily basis. I admire the wonder of art, that sense of missing that spurs me to seek and search for something that completes my being in the world. The visual, for me, is a continuous search for meaning.

A Neapolitan jury, made up of residents of the Il Camino psychotherapeutic center (https://www.comunitailcamino.org/) participates in the viewing of the films in Competition and awards one or two prizes that they themselves create in the Community and assign to the best film.
In the introspective journey that the residents undertake during their therapy, a wealth of thought and criticism is formed that offers us an original point of view on the films presented and, often, allows us viewers to uproot ourselves from social determinisms and preconceived ideas. 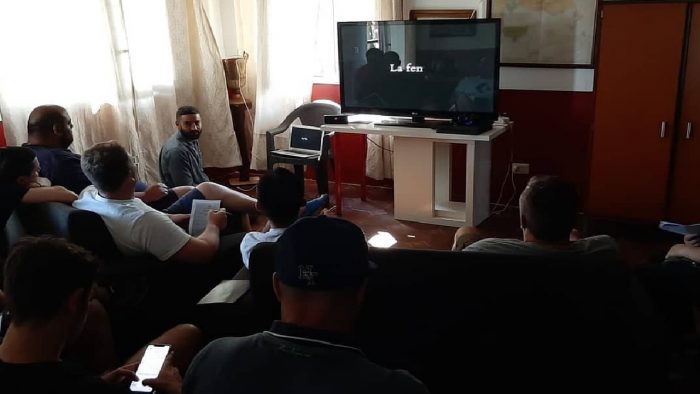 The CPS of Castellamare (https://www.cps-ong.it/) is a non-governmental organization that promotes cooperation among peoples and the integral development of the human person. For the second year, some young people from CPS form a jury and vote for their best film in the Short Film competition and award a prize from their Baobab workshop.

In order to create more and more correspondences and interactions between the Faito Doc Festival and the Faito Doc Camp (https://www.facebook.com/gliamicidellafilangieri/), this year we will also have a jury from the Camp that will vote for their best film of the Festival.

A Belgian surrealist artist, Cricou is an inventor of unusual objects. For ten years, he has been the creator of the Faito Doc awards. Cricou gives the winning films of the International Jury and the Young Jury his starfish or his tree made of copper wire as a prelude to a starry sky or he transforms a disused object into a human face, as a prize for the best short and feature films.

The ProFaito Onlus Association will offer a plaque for the Audience Award.

The Il Camino community awards one or two prizes they create and donate to the best film.

The Ottica Sacco Prize to the sharpest eye.
Camp guests each day will be able to vote by expressing a preference indicating which documentary of the day they preferred. At the end of the screening days, the documentary that has received the most votes will be awarded the Faito Doc Camp Prize.