THE PROGRAMMERS AND FILM EVALUATION CRITERIA

The Programmers’ group is made up of people of different ages and nationalities, authors, filmmakers or experts in the field, who, over a period of two quarters, view some 700 films from the Faito Doc Call for Entries, from the proposals or suggestions of a group of consultants and experts from different countries, and from the discoveries made by the programmers themselves during other international documentary festivals. Up to 50 creative documentary films (features, shorts and ultra-shorts) from around 27 countries are then selected, made by filmmakers whose visions of reality inspire a variety of escapism in us as viewers.

The diverse backgrounds and professionalism of the programmers, their critical sense and in-depth look at particular realities allow for intense debates and comparisons before providing a high quality final selection. The poetic and human qualities of the films are always privileged over the quantity of works presented.

Twice a month, the programmers meet in the house of artistic directors Nathalie Rossetti and Turi Finocchiaro (in presence and in visioconference) and discuss auteur documentaries, from direct to experimental cinema, from intimist films to animated documentaries. Both the director’s point of view and the form and originality of the work are taken into consideration, as well as the theme and its multiple meanings; in this 2022 edition the theme observed is ‘Evasions’. 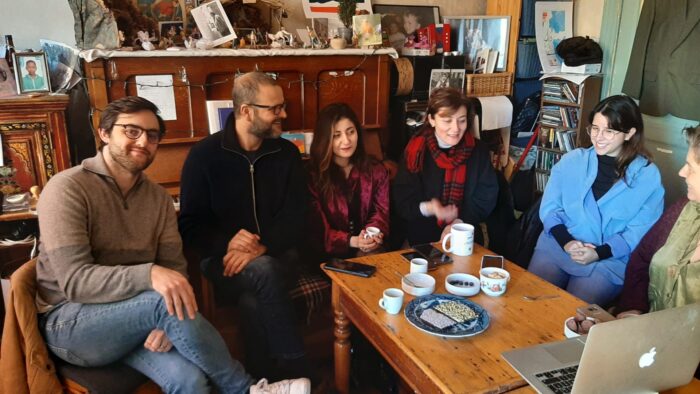 Watching the films in this edition was like going on a long journey: sometimes it was enjoyable and exciting, sometimes I couldn’t wait to get there. Sometimes the encounters were satisfying, rich in insights, surprising.  Others, it was not so good. Nevertheless, I kept travelling, because I knew that suddenly I might encounter a hidden treasure. I wish everyone a wonderful journey!

We can find escape in many stories, from people fleeing a country because of wars or natural disasters, to escape through art, in cinema, or escape from everything that harms us. I hope this selection of documentaries will thrill you and inspire everyone to make new encounters!

This year the documentaries, under the theme of escape, were selected by our team with great care. The choices were often difficult but exciting. I am sure that the films will be appreciated by the Faito Doc audience.

I have worked as a visual anthropologist and filmmaker for many years in very different environments and three countries,  but it is Faito Doc who made me see the beauty of being in the filmworld and the people who work in it again. Being part of this selection committee means passionate, loud and chaotic discussions in many languages at once whilst having extremely dedicated and serious reflections on the submitted films and their selection. Each meeting was an experience about film and how it touched each of us differently I would not want to miss anymore!

Taking part in the selection committee of the Faito Doc festival was a very nice experience both from a human and a professional point of view. The group of selectors is very diverse in terms of origin, sensitivity and education, and this diversity of outlooks made the confrontation very interesting; it opened up new perspectives for me to reflect, as well as allowed me to relativise issues that I thought were universal. And then the artistic direction of the festival is really special!

I am happy to have participated in this year’s selection, as the theme of this 15th edition is very close to my heart. I only believe in intoxication, in ecstasy and when ordinary life shackles me, I escape, one way or another. No more walls.” – Anaïs Nin

With the participation of expert consultants :

Since the Jury of Professionals, also known as the Jury of the ‘Magnificent’, which is present in the auditorium during each screening of the films in competition, is highly qualified, the programmers are proud to present a programme of films each year that surprises and excites not only the audience and the popular juries, but also the magnificent jurors.